Planning for trees: the social, economic and environmental benefits

Trees and woodlands are a key part of green infrastructure, delivering a wide range of benefits to those living nearby and beyond. Trees have a widely recognised role in protecting and enhancing the local environment but they also have a key role to play in fighting climate change with their ability to store carbon as well as making urban areas more resistant to the effects of climate change including flooding, heat, pollution and soil nutrient depletion. This is something high on the government’s agenda with commitments made in recent years to plant 440m trees to help tackle climate change. 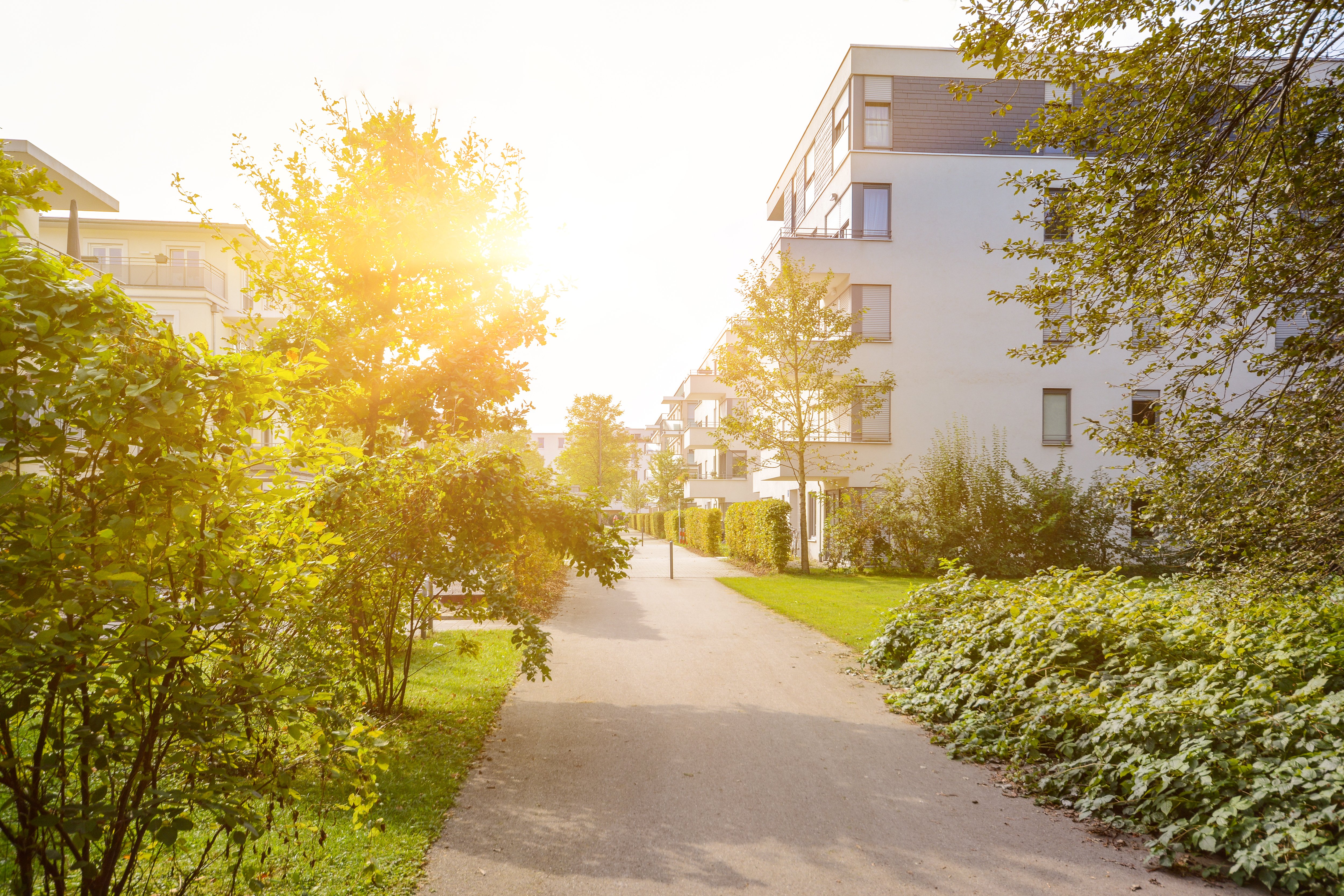 Trees are therefore an important consideration for planners and woodland preservation, management and creation is a key part of planning for new developments. In this article, we outline some of the key benefits of trees in built areas and how they can add value to new developments.

The cooling effect of trees

The urban heat island effect happens when built-up areas have a much warmer temperature than surrounding rural areas due to the high levels of concrete and pavement. They absorb and retain heat during the day creating localised warming. As climate change causes more extreme weather events and warmer summers, this effect will make living conditions uncomfortable and sometimes dangerous for the many people living in urban areas. This year Ireland experienced record-breaking temperatures of 31.7oC, a stark reminder that we need to find ways of keeping cities cooler and trees could be an important part of the solution.

Tree-covered areas in cities have a much lower land surface temperature compared with surrounding areas. This is not surprising considering the combination of the shade that is provided by their canopies and the effects of transpiration. Transpiration uses energy from the surrounding environment for the evaporation of water from within the tree. What is surprising though is that in comparison, the cooling provided by treeless green spaces is negligible.

The cooling effect of trees is not just important generally in an urban environment but can also have a direct impact on individual buildings. Studies have shown that trees properly planted around buildings can reduce air conditioning needs by 20-50%.

Flooding is a key impact of climate change and planners will need to find ways to make our cities more flood resistant. Trees and other native plant species can reduce floods as they are a key component of natural flood management. Not only can they directly intercept rain, but they can also promote higher soil infiltration rates and ‘hydraulic roughness’ which describes the increased resistance caused by trees when water flows across land. The water used by trees removes water from the catchment area reducing pressure on drainage systems.

The World Health Organisation states that air pollution is a growing issue with 9 out of 10 people now breathing polluted air and polluted air killing 7 million people globally each year with one-third of deaths from stroke, lung cancer, and heart disease being due to air pollution. On top of this, 1180 of premature deaths in Ireland in 2018 were linked to air pollution. There are several health benefits attributed to increased forestation including improved cardiovascular health, immune systems, and stress relief. Plants remove air pollution by providing a large surface area for particulate matter to settle on and by active uptake of gases into the leaves or chemical reactions with the leaf surface. Collectively these processes are called ‘dry deposition'.

Further research published in the Lancet makes the link between the presence of a tree canopy and the prevention of heart disease, hypertension and diabetes. Therefore the inclusion or preservation of trees in any new development is likely to be a welcome addition, however, the choice of species is important. Trees that are native to certain parts of the part of the country have to be carefully identified to avoid the development of invasive species and damaged biodiversity.

Trees don’t just impact physical health though. Trees and green space are strongly linked to reduced negative thoughts, reduced symptoms of depression, better-reported moods, and increased life satisfaction. Their mental health benefits have been extensively researched with countless studies showing evidence including reduced hospital recovery times, reduced stress, and encouragement to exercise. Another way that trees can help increase well-being is by reducing the noise from traffic. Research from Forest Research (FR), the research agency of the Forestry Commission (FC), in the UK, states that planting “noise buffers” composed of trees and shrubs can reduce noise by five to ten decibels for every 30m width of woodland, especially sharp tones, and this reduces noise to the human ear by approximately 50% but to achieve this affect the species and planting design must be chosen carefully.

Trees as a community resource

Trees can make for a more interesting landscape that people want to spend time in bringing the benefits of exercise and being outdoors. Trees can provide shelter from sun, rain, and wind and for children can create places to climb, hide near and view wildlife in. Desirable community spaces can also help to build local communities. The presence of trees has also been found to reduce violence and aggression in households and limit criminal activity in neighbourhoods.

For children, trees have been shown to be important in improving classroom engagement and cognitive development. One study found that children that have views of trees and green spaces from their classrooms scored substantially higher on tests measuring attention and had a faster recovery from a stressful event.

We have a commitment at Wavin to the development of these spaces in both urban and rural spaces. You can see part of our commitment in the Guaranteed Irish Forest here.

Many of the benefits of trees to communities can also translate into economic benefits which can include:

However, for many of these economic benefits, it can be difficult to calculate an exact monetary value. But without this monetary value urban trees will be viewed as just a cost and turned into a liability rather than an asset.

There are many benefits to trees in housing developments, but planners will also need to consider their maintenance and the impact that they could have on landscaping and below-ground services. Instances of pipes being broken by the growth of roots are rare, but blockage of damaged pipes is not uncommon as roots tend to extend to exploit water and nutrients in the soil.

RootSeal is a new technology for Wavin Sewer to provide added protection from trees and root ingress. It uses a natural mineral additive to harmlessly repel tree roots reducing potential damage, upheaval, and considerable costs both financial and environmental solving a number of challenges for architects, developers, and planners.

We have a range of market-leading and BIM-supported hot and cold solutions to meet your requirements.

We have a range of market-leading foul water solutions to suit your requirements including adoptable options.

BIM files which will give time and cost savings with its 100% accurate content and intelligent design assistance.

With our wealth of knowledge and expertise, we can help you to create the optimal waste water solution for your next project.

At Wavin we take stormwater management seriously and have developed systems that take flood prevention to the next level.